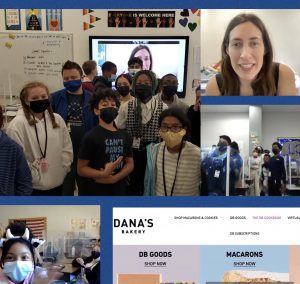 On Wednesday, October 20th, 72 seventh and eighth graders from the Teaneck Community Charter School interviewed notable chef Dana Pollack, owner and creator of Dana’s Bakery in South Hackensack. The interview, which was conducted during the school day via Zoom, was part of a STEM project in which the students are filming their own cooking videos based on a traditional recipe from their respective heritages.

“The purpose of the project,” said Ms. Yonsoo Lee, one of the 7th and 8th grade STEM teachers, “is for students to research and then perfect a recipe that reflects their respective culture or heritage. Students are learning by doing, and Ms. Pollack had some great tips on ways to film for them.”

“Outreach to a successful chef in our community,” added Ms. Lauren Scalici, another TCCS STEM teacher, “reminds students of the real world connections between school and the wider world. They understand that what they are learning to do is something chefs in the real world do as well.”

Ms. Pollack, a trained pastry chef, is the creative force behind Dana’s Bakery. The former photo-editor of Muscle and Fitness magazine, Pollack studied fine baking and the pastry arts at New York City’s Institute of Culinary Education (ICE). She was drawn to French macarons for their beauty and distinct texture. Surprised by the lack of variety in flavors, she began pairing these traditional French treasures with deserts she grew up eating.

Students spent an hour asking Pollack questions about her business and career. When one student asked about the impact of the pandemic, Pollack replied that “during quarantine, my online orders quadrupled,” adding that many people who worked from home began ordering more from home.

Pollack is the author of “Dana’s Bakery,” a cookbook containing 100 dessert recipes. She lives in New York City, although one of her bakeries is in South Hackensack.

Harassment, Intimidation, and Bullying of any kind is not tolerated at TCCS. You can read more about this in the school's official policy on this matter.  You can click below to view the the official school HIB Grade Report.